MSG - The Messenger of God | Teaser 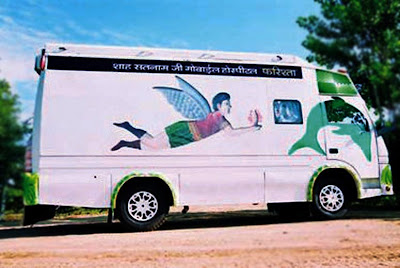 Realizing the need of remote areas, World’s smallest mobile hospital Farishta was conceived to provide almost the same spectrum of facilities as a general hospital. This was designed and dedicated to humanity by Saint Gurmeet Ram Rahim Singh Ji Insan . Farishta has been started to provide free outreach medical services of Shah Satnam Ji Speciality Hospitals. Experienced doctors provide free medical services to the rural areas of Sirsa using Farishta Mobile Hospital. This also has a capacity to carry medical staff apart from the equipments. It is multifunctional since it provides the entire array of services ranging from Operation theatre to labour room and even ICU or dental chair. In the last few years, more than forty thousands patients have been benefitted with free medical services by these two Mobile Hospitals. Farishta Mobile Hospital organized 14 Medical Camps in Sirsa, in which 8,547 patients were checked up in 2008 and 22,072 patients in the year 2009 . This increased to over 25,000 patients in 2010 . 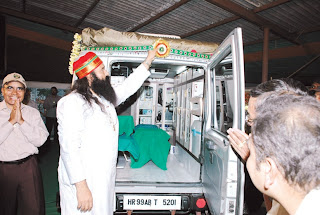 The Little Angel
Nanha Farishta The modification of previous existing Farishta. While utilizing the facilities of Shah Satnam Ji Mobile Hospital Farishta. The doctors and the managers felt the need of modification over the existing Mobile Hospital. The speed of Tata 407 based mobile unit was limited, so the rescue could not reach the targeted places of services in time. So with the grace and technical guidance of our revered Guru Ji Saint Gurmeet Ram Rahim Singh Ji Insan, Shah Satnam Ji Mobile Hospital ( Nanha Farishta ) was mounted on Trax cruiser vehicle with all the existing and above mentioned facilities and additional facilities of multi parameter, deferbrilator, thus equipping this mobile hospital to be used as outdoor patient department with medical store, labour room, operation theatre and intensive care unit.

“Nanha Farishta Mobile Hospital” – the hospital still got smaller!!! Presently the smallest Mobile Hospital in the World also feels honored to be one of the graceful creations of Guruji. Holding of regular free medical camps in rural areas. 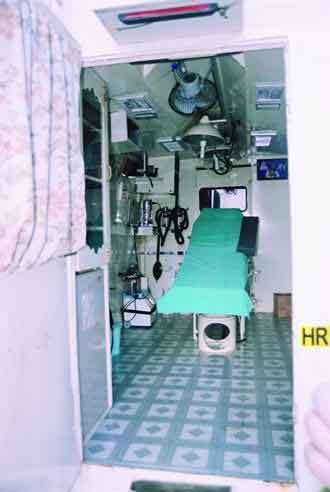 Posted by Heena Insan at 1:56 PM No comments:

By the grace and benevolence of Murshid-E-Kamil, in Shah Satnam Ji Girl’s Hostel, 450 rooms each shaped like a heart were constructed in short period of 42 days. Not only the lay persons but even experienced Civil engineers are surprised by this astounding feat. To construct this building in this miniscule time span of 42 days instead of 6 or 7 years, is in no way less than a world record.


All the rooms are well equipped with modern facilities. On the top of this marvellous three-storeyed building there is an attractive water-tank in the shape of a lotus upon which a statue of an angelic cherub stands.
There are two large study rooms-cum-halls for providing peaceful environs to the students for reading. A well equipped and well furnished dining hall where 1000 students can have their meals together is also present. To cool the overhead water tanks, a unique lift of its own kind has been fabricated by which even the large blocks of ice can be hauled up to the top. In this picture we can see a panoramic view of Shah Satnam Ji Girl’s Hostel from outside. 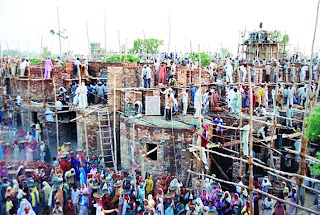 The ocean of generosity of the Murshid-E-Kamil is unfathomable. Shah Satnam Ji Cricket Stadium is a feat which leaves everyone wonderstruck. A stadium of international specifications has been constructed under Guruji’s gracious helmsman ship in merely 42 days. The base which included the stands and the foundation of the pavilion took merely 14 days to complete. It boundary measures 75 yards. There are three pitches in the ground. One of the pitches simulates the pitch of the ground of Ferozshah Kotla. The second is like the pitch of Chinnaswamy stadium, Bangalore and the third and central pitch has been prepared with the guidance of Guruji. The stadium is completely compatible for hosting an international event. It has light entrances. Its scoreboard with its unique design can be easily visualized from a distance. An original and totally indigenous mechanism has been utilized. The seating capacity of the stadium is 25000 to 30000 spectators in eight stands. 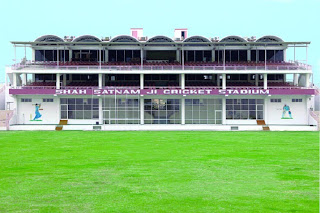 Under the guidance of the Most Adorable Hazoor Maharaj Ji, a spacious Sachkahand Hall has been built in the area of 2 Lac [200,000] square feet. And the unbelievable fact is that it was completed in just 30 days.
“Pillars have been erected inside the hall width-wise and at the distance of approx 40 feet from each other. Frames of 40 feet each have been set up on these pillars. These pillars are of the dimensions 28″x28″. Likewise, lengthwise there are 24 pillars on each side distance between them is 20 feet. A total of 216 pillars are there in the hall and 65 girders are in each line of pillars. In this way the roof of the hall comprises 1650 frames of 6 feet width and 1625 girders. There is an excellent arrangement of 450-500 fans and about 250 tube lights for the comfort of devotees. The floor work is ‘crazy’ stones. This floor in the area of 2 lac square feet has been completed in merely 9 days only. And the strange fact is the crazy stones are fixed in mud only and polished and varnished by machines as usual.

Posted by Heena Insan at 1:43 PM No comments: 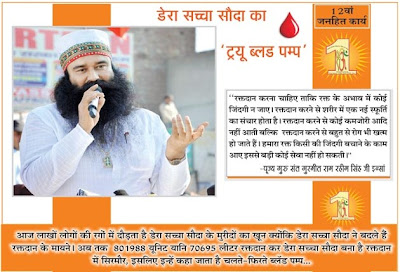 Posted by Heena Insan at 2:49 PM No comments:

I’d like to share with you a video of Satsang by Saint Gurmeet Ram Rahim Singh Ji Insan dated 18th December 2011 in which there are few techniques to cut through the pattern of negative thinking through spiritual ways .If you like , please don't forget to share it
Posted by Heena Insan at 1:26 PM No comments: 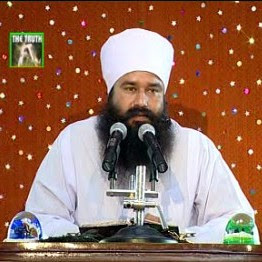